Hostels and cottages in a courtyard that was once one of Gustav Vasa's royal manors. Relaxing stay by the sea in an enchanting Roslagen nature.

The cows grazing in woodland and pastures in the nearby surroundings belong to our agriculture. They contribute to the open countryside that we can still enjoy this.

Here on the island you will find both restaurant and supermarket within easy walking or cykelavstånd.En lovely walk through the beautiful countryside, past Gräsöns beautiful old wooden church, takes you in 5 minutes to the ferry situation where the car ferry takes you to Öregrund with more business and a bustling harbor life.

We also have bikes for hire.

Gräsö Farm sooner
In 1549 redeemed Gustav Vasa 12 farmsteads on Gräsö.
A few years later, the farmers of these farms move.
As farmers move came five of these farms to breastfed form Gräsö Kungsgård. Kungsgården inheritedGustav Vasa's descendants until 1622, when the National Council Nils Bielke bought it, and together with his son ran the farm for 65 years. From 1687 to 1787 came the farm belonging to the Crown again, which leased the farm to frälsemän, including Jennings, von Rosen, Taube and Koskull. In 1787 the farm was bought by Samuel af Ugglas, and thus came to belong to the Forsmark Bruk until 1945, when Carl Lamm bought the farm. Today Östhammar Municipality owns the farm. Gräsö Farm today farm rented by Ann-Britt Högström and her family, who runs the farm and hostel.
The family has shifted from dairy to beef cattle, autumn 2009, the new barn finished with 80 cows.

The farm is part of a nature reserve which stretches over 310 hectares in the southern part of Gräsö. Gräsö Farm owned by the municipality of Östhammar since 1965 and the nature reserve is managed by
Upplandsstiftelsen. Many of the rare plant and animal speciesavailable in the pastures is dependent on livestock. More facts about naturresrvatet found via the links on the Administrative Board and Upplandsstiftelsen. 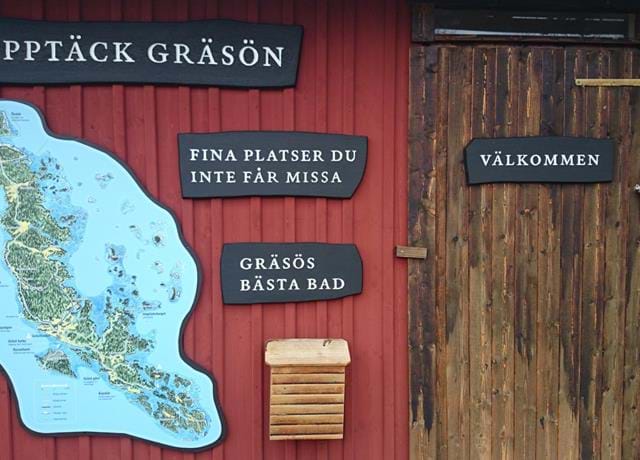 |Translated by Google translation| Experience Gräsö on the island's own terms and take part of the living history th...

Prices from 300 SEK per person per night.

We have 6 rooms in the main building, 1 annexe and 2 charming cottages located. You stay with self-catering, bed linen and towels are not. Bed linen can be hired, breakfast can be purchased, ordered at the reception the day before.