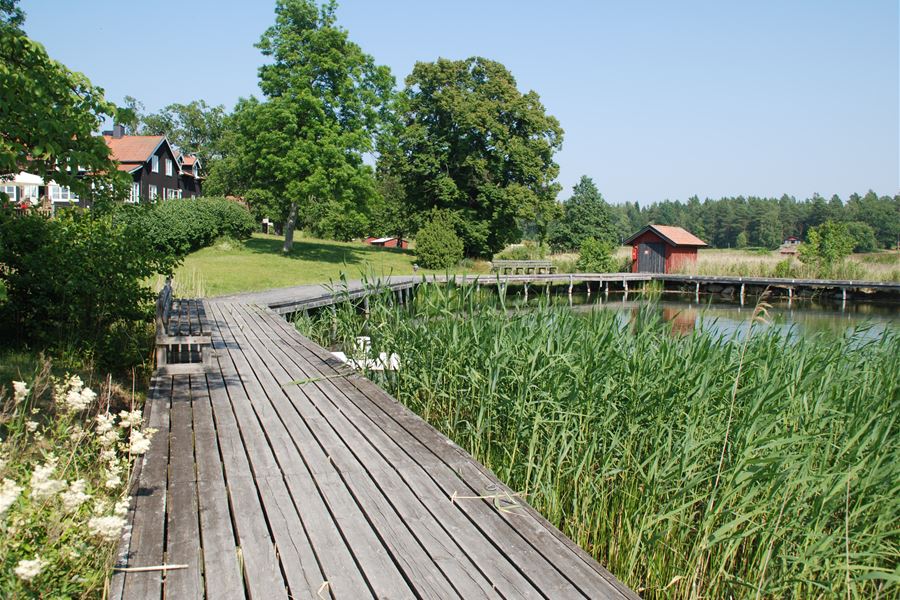 The island Nässlingen situated between Ljusterö and Svartsö has a 4 km shoreline, an archipelago farm, cottages for rent, a guest harbour, a summer tavern and fabulous sunsets.
Book now
Achipelago

Nässlingen is an attraction for all ages. You can stay in a cottage, go for a swim, take a stroll, go fishing, go for a meal and get inspired by the views, the smells and the peacefulnes.

Nässlingen is a former archiepelago homestead - an agricultural property with living quarters and land. When the homestead was closed down in the 1940s, the treasurer of the carpenters’ union, Efraim Andersson (grandfather of Benny Andersson from ABBA), managed to get the union to buy the island to make it into a holiday island for builders.
In 1977, the union Svenska Byggnadsarbetareförbundet built conference facilities on the island. Later, the place has been run as both a holiday village/hotel and conference facilities. But not anymore.

At Nässlingen, there is now, once again, an archipelago farm with grazing animals preserving the open landscape and plans for a farmyard dairy with on-site cheese production. There are also cottages for rent, a guest harbour with 66 berths with y-booms and new toilet and shower facilities. In summer, the restaurant Framfickan “Bryggan på Nässlingen” is open to guests.

Around the perimeter of the island, there is an exercise trail of about two kilometers which is also suitable for people with disabilities. Kvarnholmen on the south side of the harbour has remnants of an old windmill and on the southern point there are remnants of an earlier settlement. There is a shallow beach on the south side of Kvarnholmen and lovely smooth rocky areas by the water on the western part of the island. Nässlingen also has a football ground, a barbeque area and a boule court.

Getting there
You can go by car, bike or bus from Danderyd bus station and road ferry to Ljusterö and archipelago boat from Åsättra jetty at Ljusterö. The bus stops at Åsättra jetty where the boat leaves for Nässlingen.

The jetty Åsättra brygga
Archipelago boats operated by Waxholmsbolaget operates Nässlingen all year round. Summer and winter schedule differs, so pleace check the timetable when planning your trip. There is parking near the jetty.

The jetty is not adapted for people with disabilities.
There is a kiosk nearby, though with limited opening hours.

The jetty at Nässlingen
There is a boat service operating Nässlingen all year round. Summer and winter schedule differs, so pleace check the timetable when planning your trip.
Signal by using the semaphore when you want to catch the next boat.

The jetty at Nässlingen is not adapted for people with disabilities, but there is a bench for resting.

If you go to Nässlingen by private boat, you will berth at the guest harbour.
There are 66 berths with y-booms - booking through dockspot.com.